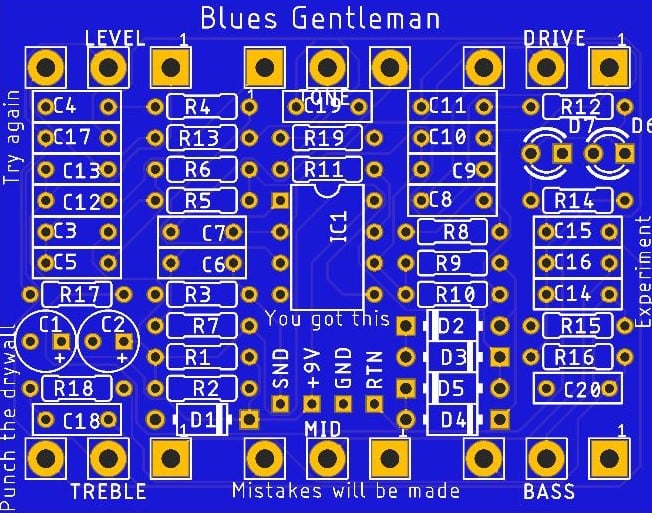 The Blues Gentleman Project is design to build either a Bluesbreaker or Guvnor on the same board. Both pedals are very similar, so I have put them onto the same board in order to build two effects with the same board, and combine the two effects together. Information on combining the two is later explained in the analysis section.

Sending the zip file to PCB manufacturers such as JLC PCB or OSH park will allow you to print your own boards if you don't want to buy it from my store. Also included are the Schematic and Board files, if you wish to edit them in Eagle, and the BOM.

If you're interested in learning the nitty gritty of how these circuits work, go to electrosmash.com . Their pedal analyses are amazing. In this analysis I will be explaining basic operations and everything you'll need to know in order to modify and experiment with this design.

Initially, in the power section, we have D1, C1, C2, R1, and R2. D1 acts as reverse polarity protection. If say you used a power jack on the pedal that was center negative, and someone plugged in a center positive voltage source, the the current will flow through the diode and back to the voltage source so the pedal will not get damaged. C1 and C2 act as smoothing capacitors. It is always possible that the power source used is not a perfect DC supply. These capacitors Build up and release charge and that smooths out the AC component the power source emits. R1 and R2 create a voltage divider network. Equation: Vo=Vin(R2/(R1+R2)). The output voltage is equal to half the supply voltage, which in this case, is 4.5V. This voltage creates what is called a "Virtual Ground" for the Op-amps. This will be the center point in your audio signal. With a 9V source, the signal should be able to reach a little smaller than 9V pk-pk without any distortion of the Op-amp.

Next, is the negative feedback loop. The Drive potentiometer raises and lowers the gain of this feedback loop. In the Bluesbreaker circuit, the Drive pot, R5, and R6 determine the gain. In the Guvnor circuit, the Drive pot and R4 determine the gain. Equation: Gain=1+Drive/(R4 or (1/(1/R5+1/R6))). For the Bluesbreaker, Gain Max = 7.73 (17.8dB). For the Guvnor, Gain Max = 46.4 (33.3dB). Drive and C7 create a variable low pass filter. The equation is the same as the one for the high pass filter. This cuts out high frequencies above 15.9KHz which is above most guitar frequencies and limits white noise. C4 and R4 create a high pass filter. R5, R6, C3, and C5 form one as well. They cut lower frequencies and emphasize the mid frequencies.

Next, is a system composed of C8, C9, and R8. C8 and C9 are coupling capacitors and remove any DC element from the signal. R8 along with R10, create the feedback loop in IC1B. This bumps up the signal even more. This is an inverting configuration, thus the signal phase is altered 180 degrees and the gain formula changes. Gain=R10/R8. For the Bluesbreaker, Gain = 22 (26.8dB). For the Guvnor, Gain = 68 (36.6dB). C10 and R10 also create low pass filter in the Guvnor circuit that cuts frequencies below 1KHz. This cut is in the mid-range territory and makes the Guvnor more mid focused than the Bluesbreaker. D2 - D5 provide the clipping in the Bluesbreaker. This diode arrangement is called soft clipping, and in agreement with the name, provides a softer sound as with D6 and D7, are in a hard clipping configuration and produce a harsher sound. R9 limits the current going into the soft clipping system and R12 does the same for the hard clipping system.

Following IC1B, the signal is sent trough C11 which removes the DC component from the signal. Then the signal moves through the aforementioned hard clipping system. Then, the signal enters a FMV (Fender, Marshall, and Vox) style tone stack. This is the same tone stack configuration you would see in and vintage amplifier. these are known to create a mid scoop in the signal which is previously compensated by the feedback stages. To get a better look at this, i suggest visiting the Tone Stack Calculator website. It contains plenty of tone stack models that you can alter and mess around with. Finally after this tone stack, the signal travels through the aforementioned Level control and filters.

What Should I build?

I suggest purchasing two boards to build both and compare. A cheaper option would be to breadboard the circuits and find which one sounds better to you. In general, the Bluesbreaker offers a nice blues/R&B tone (duh) and the Guvnor is closer to a Marshall Amplifier emulation. I hope this info helps you in your pedal building journey and be sure to checkout Blues Gentleman board for sale on this website.